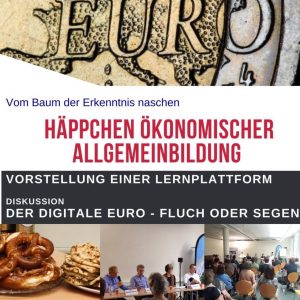 weltgewandt e.V. invited together with the public library Wolfdietrich Schnurre an event to launch the learning platform on Economic Literacy in Europe in Berlin on 19th May 2022. The seats were all taken as four colleagues presented their courses on Modern Monetary Theory, Strategies to Manage a Crises, Introduction to Feminist Economics and Economy and Climate for discussion. In times of burgeoning inflation, the course on Modern Monetary Theory (MMT) in particular provoked questions from the audience. Is it appropriate for a government to spend money and create jobs even if government revenues are not too high? Can spending money lead to inflation? No, it cannot, say representatives of MMT. Why? The best way to find out is to read the course.

Following this, money was also the focus of interest. Attention now turned to the question of its digitalisation and that is, according to plans of the European Central Bank to introduce a Digital Euro. What consequences will this have for citizens? What is likely to be a curse and what a blessing?

Guests were invited who discuss different positions on the topic: Dirk Schrade from the Deutsche Bundesbank (as part of the System of European Central Banks), Dr. Norbert Häring, journalist and book author, and Dr. Dirk Ehnts, board spokesman of the Pufendorf Society. The latter questioned the economic necessity of a digital euro – that is, of “electronic cash”. Digital payment has long been common practice and works well, he said. “We have the solution, but we don’t know what the problem is” – to which the digital euro should provide the answer.

Dirk Schrade referred to the reasons for the intended introduction: a) technical developments because less cash would be used especially in some countries and b) currency competition. He was referring to the Libra, now Diem project by Facebook (today Meta). Its worldwide implementation would have affected the power of central banks in favour of large corporations. Dr. Norbert Häring, on the other hand, warned against the abolition of cash and the associated loss of privacy. He pointed to the danger that a digital euro could go hand in hand with the introduction of a social credit system on the Chinese model. Corresponding pilot projects are already being implemented in Bologna, Rome, Vienna and Bavaria, he said.

“Democracy must be defended,” meant Dirk Schrader and emphasised that much depends on how a digital euro is designed.

Afterwards, the audience discussed this and other questions with the speakers and with each other over summer rolls, pretzels and drinks.