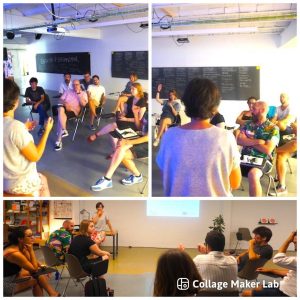 ITD – Innovación, Transferencia y Desarrollo hosted an event in Barcelona/Spain on 21st July 2022 to introduce economic education to interested citizens. It started with a sociometric exercise. In this way, the participants were asked what they knew about the different schools of economic thought, about neoclassicism, the marginalists, Marx, Keynes and others. Then the ITD team’s course on different economic theories was put up for discussion. This was combined with a look at the history of economic thought. It was amazing for the participants to see the impact theory can have in political and social practice. Theory can be quite practical!

This also became clear when the discussion turned to the course “Economic Strategies to manage the crises“. In it, different options were reflected: a political strategy to promote market mechanisms or a policy in which the state takes action to economic recovery through investments. They were debated using the example of Spain during the 2007-12 crisis. Viewed in the European horizon, that is, adding the influence of the European Central Bank, the Commission and other institutions, a mix of both was noted.

“We should talk more often about economic issues.” “Somehow I perceive what is happening. Now I understand some things better.” This was the feedback from two participants.